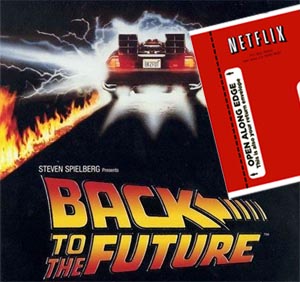 If you read this in hopes of find out how to rip Netflix DVD, I’m going to dissapoint you… But have a laugh at this. I stumbled upon an article on HackingNetflix.com about Real DVD Software letting you legally rip DVDs (btw, if you haven’t heard they recently lost their case in court, so it’s no longer avaialble).  Comments to the article discussing how can CSRs at Netflix find out if you are copying DVDs had me RWLUT (rolling with laughter under the table). Here’s are some of the funniest:

Most movies don’t completely fill a DVD thus leaving extra empty bits on the tracks. When making copies of DVDs some of these bits are reflected off the laser reader and bounce back onto the Netflix disk. Unless you carefully wash and polish the disk before returning, these excess empty bits can be found using a bit sniffer which Netflix uses to randomly check returned DVDs. If there’s a significantly higher number of empty bits sniffed than during normal playing leaves, that’s a solid indication of the DVD having been copied.

@jimofoz – only the most naive user would still have a DVD drive without ABRT (anti bit reflection technology).

@kh: I understand that Slysoft has released a firmware that will add the ABRT feature to any drive that is currently lacking. Those guys are awesome!

The best way to guard against bit reflection is to shine a flashlight on the data side of the DVD. Make sure it is not an LED flashlight, though – it has to be a normal lightbulb.

Posted by: Throttled by Netflix

@Throttled by Netflix: Yes, but do you do this before or after ripping the disc? I have heard of this method of avoiding detection in the past, and nobody has ever explained that to me. One certainly couldn’t do this *while* the rip was occurring.

You can actually do this while ripping the disc if you have a Flux Capacitor dongle attached to an empty USB port. (Make sure you disable your internet connection though so it doesn’t report it back to Netflix).

@Doc: I just tried you method, but something went wrong with the IFO files. I’m able to rip the disc to my hard drive, but I can’t burn it. Also, the disc went missing from the drive, and reappeared about an hour later, covered with manure. wtf?

You guys should make like a tree and get out of here. Buttheads.

It’s true, it’s almost IMPOSSIBLE to rip a dvd. You need all sorts of special hardware and hacked programs. Plus when you do it, the dvd has special software on it that sends a message to the MPAA. Then they get a lawyer and come after you. How do you think all those people got sued online? Because the dvd “phoned home” and said they were making copies. Be very very careful. Also, you can find the dvd dongle on Ebay. It will slightly reduce your chances of being caught.

It is correct that our loss prevention department consisted of one woman. So the previous poster obviously does work for Netflix. If a customer called us and straight up told us that they copy movies which happend everyday– we would forward their info to the ONE loss prevention person and she would usually send the customer an email and cancel the account. The only other way we could really catch someone is if they returned their burnt disc to us. You can totally burn discs and get away with it as long as you don’t call Netflix and tell them. You are breaking the law though– without owning the movie you do not have the right to copy it.