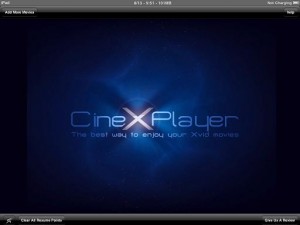 CineXPlayer is an app that will let you play XVid and DivX movies on your iPad without having to have to convert them!  I’m shocked how this was allowed in the app store, Apple has dumb policy about applications that duplicate functionality, but this one went thru!  And it’s FREE!!!  No wonder it’s currently #1 app on top of the Free Apps chart in the App Store 🙂  No need to Jailbreak your device.  So is it any good?  Read this mini review to find out!

There are several things I’d like to see in a perfect Video Player program.

In conclusion I’d have to say that this seems like there’s a lot of room for improvement, but CineXPlayer definitely has my vote.  The ammount of time it’s going to save me by not having to convert TV shows is huge.

Update: I’ve discovered a pretty annoying bug in CineXPlayer while testing playback of MP4 files. Because unsupported files will not show up in the player’s list, there’s no way to delete them from your iPad!  Fortunately you can delete it from within iTunes. Go to Apps tab, select CineXplayer from Apps List under File sharing. In the right window select file you want to remove and hit Delete button on your physical keyboard.