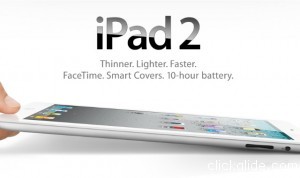 In one of my previous posts I wrote about iPad 2 shortages, however when you really want something you’ll find a way. So I did get mine about a week after it was released.
By now it’s probably not a big deal but back 1 month ago, only way you can get one (other than standing in line on the release day) is either pay insane amount of money on eBay, or keep checking local Apple and/or Best Buy stores.
I kept calling Apple stores, but they didn’t have any, so eventually I went to J&R store in the NYC and they let me pre-order one. I got lucky, they got shipment on the next day and I was one happy owner of the white 32GB WiFI version.

Now after about a month of vigorous use, I still love this tablet.  White color was a great choice, despite of what some people saying about “distraction factor”.  It makes no difference when watching movies, fingerprints are invisible on the bezel and it just looks hot.  Nice change after the black iPad 1.

iPad 2 feels absolutely as thin as they say it is, very comfortable to hold.  And magnetic cover is nice (but overpriced). It does wonders at keeping display clean, works as a great stand, and autosleep function saves you from wearing down power/sleep buttons unnecessarily.

There have been a panic about back-light bleeding, but I think it’s just a BS. Before selling my iPad 1 I checked it for back-light bleed, and it actually had it!  After a year of owning it I never knew about this “problem”, it never bother me, and I only discovered it because of the reported “issues” with iPad 2.  Yes I can see some light bleeding on the edge when screen is totally dark and on but who cares, it’s not noticeable in day to day use.

Camera. Yes camera sucks, especially rear one. I didn’t expect much from the front camera, it’s usable for Skype (and don’t get me started on stubborn as donkey Skype not wanted to release full size iPad App), but rear one really let me down. Not that I want to make SLR quality photos with it, but there’s huge amount of noise and I simply don’t understand why smaller iPhone 4 has better camera than larger iPad.  It’s still ok for AR applications or for filming presentations (meetings, lectures at the college, etc.). If you do plan to use it for movies, get 64 GB version, trust me, I ran out of disk space pretty quickly. It’s not just the movie itself, if you plan to use iMovie app, you need 3x more space for temporary files,  original and rendered versions.

Battery life is good, although I’m charging it daily because I use iPad a lot.  I wish it could last whole day nonstop, but we are nowhere near Betavoltaic batteries yet.

Smart cover is nice, it’s a clever idea and it works pretty well generally, however at some point I think I’ll get different cover for couple of reasons. One reason would be it’s pretty hard to keep iPad standing on your lap against front seat of the train (handsfree) because it keeps on sliding (my iPad 1 stayed put in it’s cover). And when I will be traveling I’d like a little more protection on the sides.

Recently (probably due to upper management owning and loving their iPads) my office implemented Exchange support and local WiFi hotspot at work that’s compatible with iOS devices. So I bought Apple Wireless Keyboard and as an experiment used iPad exclusively in the office during the meetings instead of laptop.
Yes it can replace Laptop! With RDP client I can always connect to my workstation, “Pages” has no problems with MS Word Documents (even .docx) and “Numbers” can read Microsoft Excel 2010 spreadsheets too. Plus with little ingenuity and HDMI adapter, iPad can be connected to the conference room projector for presentations.

The only part I’m really upset about is lack of Jailbreak for iPad2 as of this time. I opted to get non 3G version in hopes of using iBluever app tethered to my Blackberry, but it requires JB. I’m still hopeful tho.

In the conclusion, I’m loving my iPad 2 and I think it was very worth the upgrade!