Unboxing and First look at HyperDrive 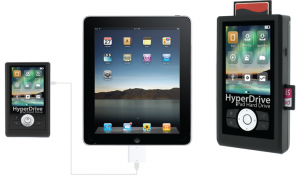 HyperDrive stands out from the crowd of other “image tank” type storage devices. As any traveling photographer knows, you need a place to store your pictures until you come back home and upload them to your computer. I’ve been carrying laptop with me on vacations, however lately I opted out to take a much lighter iPad instead. The fact that HyperDrive works with iPad among other great things convinced me in getting one. See my Unboxing and First Look video after the break.

So what other redeeming qualities HyperDrive has other than iPad connectivity? Well there’s plenty. There are other similar image tanks on the market, but most of them are much more expensive. I can’t simply justify getting a portable storage for $500 with little of actual disk space. HyperDrive comes in as a bare-bone enclosure, where you can drop any 2.5″ SATA HDD of practically any capacity. Enclosure costs $250, however hard drives can be found for as little as $50 per 500GB. I challenge you to find a better portable 500GB storage with LCD screen and card reader for $300.

But besides price there were other things that grabbed my attention. Transfer speed is fast, really fast.  I did some quick tests and 4GB transfer from a slowest CF card I had (Sandisk Extreme II) took 4:30 at speeds of about 15 MB/s. Fastest card I had was copying at a speed of 26 MB/s. That’s about 40 seconds per Gigabyte of photos. And that’s with a real time verification!

Data protection is something I didn’t see on any other image tank devices, this one has it!  Imported images are verified on the fly with CRC checks. Hard drive’s health is monitored with S.M.A.R.T. and you can check it or CF cards with embedded utilities. Obviously mechanical hard drive here is still the weakest link, you can really feel it spinning in your hand, so when you transferring on the go, HDD damage is real possibility. I’m wishing this device had a Gyro sensor and can shut down the drive when it detects movement like many laptops do. But there’s always an option to add SSD, I think it would be compatible, will make device even lighter and save on battery usage. However at this time SSD are still too expensive, so I might get one in the future (let’s say if I have another Wedding Photography gig 🙂 ).

Sanho (device manufacturer) claims that battery life can last up to 250 GB of transfer. That’s a pretty impressive claim, one I yet to confirm. Internal battery (18650 3.7V 2600mAh) is user replaceable, and I’ve seen them being sold on Amazon for $8. I only wish there was a simpler way to open the case other than removing two tiny screws. BTW small screwdriver is included, but it’s a very bad one…

Other than screwdriver HyperDrive came with a nice neoprene case which can be attached to the belt, a wall charger and a USB Cable. Nice thing is that it can be charged via USB or AC adapter, so you don’t really need to take special charger with you on a trip.

You can probably tell that I’m really impressed by the HyperDrive. Of course I only had it for less than a day, so I will update you as I go.

Update: If you were curious how it works with iPad (as I was), it’s actually quite simple. Since CF card is imported into a separate folder with all structure preserved, HyperDrive just emulates a connection to one of those folders (it asks you to choose one), so for iPad is not any different when inserting an SD card or connecting camera. It will see familiar structure, Hyperdrive will provide needed USB power and import will work as usual.