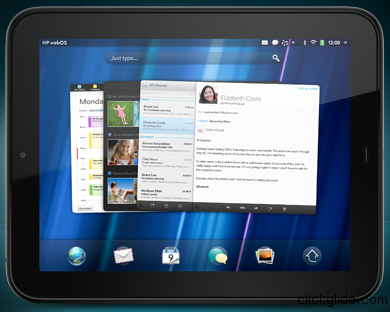 Following HP Shocking Announcement that they will be getting out of Tablet and WebOS buisness (collectively killing Palm legacy) price of 16 GB TouchPad was slashed to $99. So for a price of crappy 10” picture frame you can get fully functioning tablet!  I didn’t get on the firesale right a way (since I already have iPad2) but when I heard that my local store (J&R) was taking pre-orders I just couldn’t resist the deal. Now I wish I got 2! You can easily sell one on eBay for $200-250, essentially one tablet pays for both, but too late for regrets 🙂
Now after having it for almost 2 weeksI can share my impressions and compare it to the iPad 2. See full review after the break.

Side by side Apple iPad (left), HP Touchpad (right)

HP Touchpad packaging is similar yet slightly better than Apple’s. Once you remove outer plastic, inside compartment of the box slides out. It’s pretty neat. 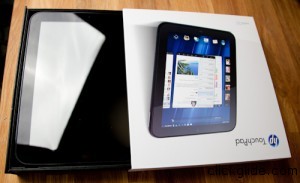 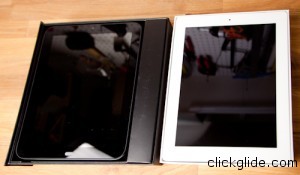 Main space holds Touchpad cover with clear film, just like iPad, and next to it is rectangular box holding power supply and and micro-USB cable. 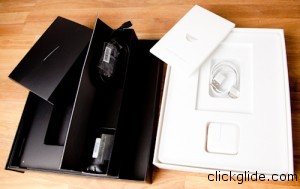 Once you remove tablet there’s a little box underneath that holds some paperwork and a screen cleaning cloth. 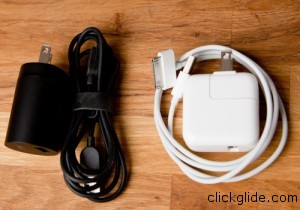 USB Chargers (Touchpad on the left)

Out of the box, my Touchpad had 54% of battery charge, so I could use it right away.

Touchpad on the left, iPad on the right

Freed from plastic wrap, I held a shiny black tablet in my hands. It’s a fatso comparing to iPad or Galaxy Tab, and is quite heavier at 1.6 lb. From the top it’s size is compatible to the iPad 2, however it’s almost twice as thick as iPad 2.

Still it feels nice in the heads, plastic back is slightly less slippery in my hands than iPad’s metal back. On the right side here’s a rocker volume buttons and there’s a power button at the top. Left side has a Stereo speakers (unusual for Tablet), top left side has standard headphone jack, and there’s a micro-USB jack on the bottom. One strange thing that I discovered, was a pop-out compartment on the lower right side. It seems like there’s a slot behind it to hold 3G/4G module, SIM card or a maybe SD Card?  I cant’ tell and I never seen it mentioned in the reviews. After briefly googling on the subject, I wasn’t able to find any definitive information, other than pictures of the said slot taken by someone who disassembled the unit. http://www.techrepublic.com/photos/cracking-open-the-hp-touchpad/6253940?seq=39
There’s a front facing VGA camera, but alas no rear camera at all.  Overal built seems slightly flimsy after you start using the Touchpad. Left side cracks a little when holding, it seems that case is not very solid. Rocker volume buttons also vobble and rattle a little if you touch it slightly.
Main “home” button on the front of the screen has long oval shape, and slightly recessed. It felt slightly strange to me, for some reason I fell like I can break it easily, and it seems to require just a bit more effort to press compared to iPad’s home button. One awesome thing about this button is that it has built in LED which glows white when you not on the main screen and seems like it’s painted on. It also serves as a blinking new message indicator when table is in sleep mode. Clever thinking on part of HP here!
Charger is cute little barrel with folding legs and slot for USB Cable. Micro-USB cable doesn’t feel cheap and sufficiently long.
Powering On and Registration.
To power Touchpad for the first time I had to hold power button for what felt like 15 seconds. After this HP logo appears and unit starts to boot. I didn’t time boot time but it was around 5 minutes.  Much longer than blank iPad. Once booted up you are given options to choose Language, Country and setup WiFi connection. Then you need to create a WebOS account. No stupid “connect to iTunes to continue” crap! 🙂  After quick registering Touchpad is fully ready for action.

Nothing special to write about LCD screen. It feels same as iPads, same resolution same brightness, I personally didn’t notice anything different here. It’s even protected to same Gorilla Glass (according to online sources).
One bad thing about the screen is that it’s a really good fingerprint magnet. Fingerprints are very visible and have to be constantly wiped out. iPad has this problem too, but nowhere near as bad due to special screen coating. 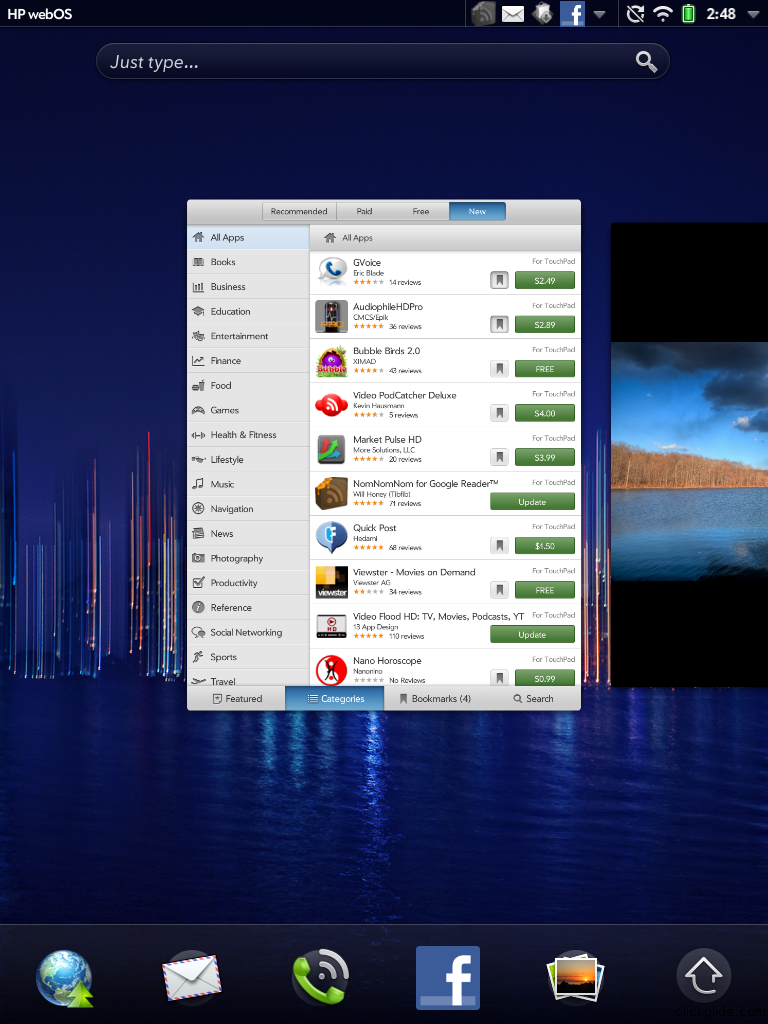 Now we get to the interesting stuff. Using WebOS is … well different from iOS.  And it’s very refreshing simply because it’s different.  Using it was very intuitive for me, I didn’t have to go thru manual.  There’s a customizable application bar on the button, just like iPad launchbar (I don’t remember actual name for it).  To see list of all apps, you press last button on the bar. Once you exit application it minimizes to a “card”. Multiple windows from same application get stacked on top of each card. To completely exit app, you swipe it dismissively towards the app. Feels very natural. When you launch app thre’s a noticable lag as it loads. Even for smallest apps like Settings or Notes. It’s defiantly slower than many iPad apps.  Speaking of settings, it’s not a single app but rather a collecting of apps. Some will control WiFi, some will let you change screen settings.  Nice feature here is top menu which let’s you quickly check battery status, choose WiFi network, lock screen rotation, mute, etc. This is basically same as SBSettings extention on Jailbroken iPad. Apple are you listening? 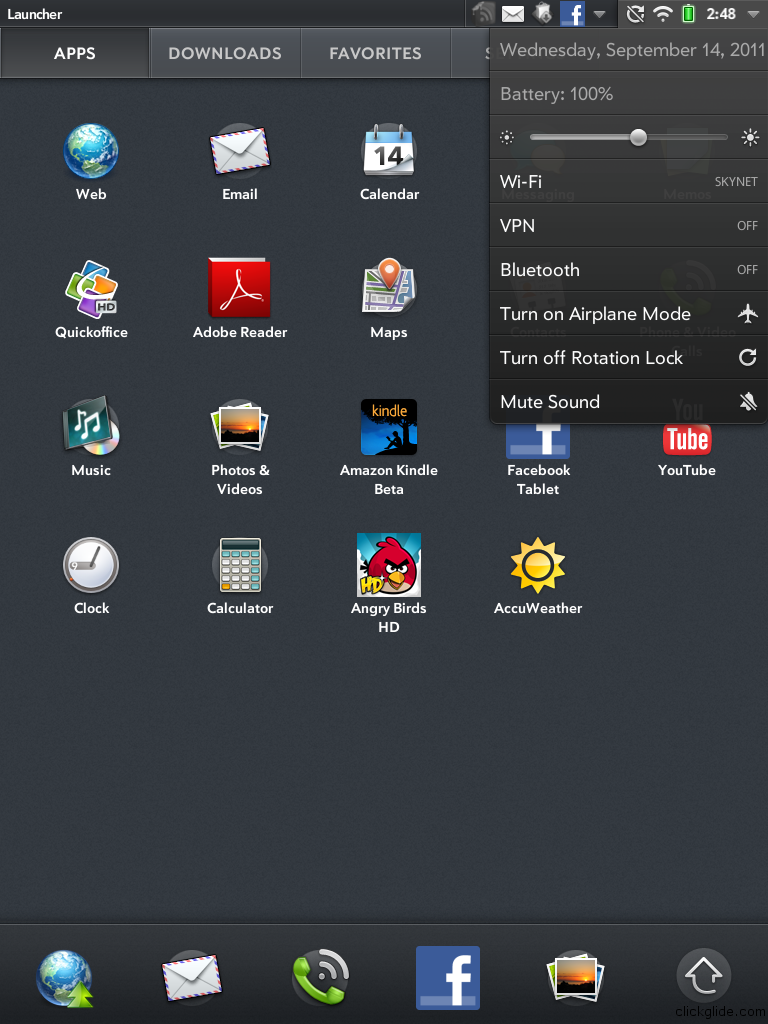 Transferring files to/from Touchpad is what every Tablet out there should be able to do with ease. Just like on Android tablet, you plug in USB and it connects to our PC as removal drive. You. Can. Drag & Drop!!!  No iTunes, HPTunes or other *tunes crap-ware required. Total Freedom! Just create your folder and copy mp3s, pictures or videos.  Well unfortunatley video code support is very limited, just like on iPad. It wont’ play DivX, XVid, avi or mkv.  So you’ll either have to re-encode using Handbrake or get 3rd party video player app. Speaking of Apps, there’s an HP built in store which have a pretty extenstive selection of apps. I didn’t expect so many on a tablet that’s only been out for about a month.  Most of them were made for the phone running WebOS, however there’s quite a selection of apps optimized for Tablet.  And a lot of the good once a free. It’s sad that with bleak future of WebOS you likely won’t see much of new apps being developed.

Performance wise Touchpad did disappoint me (I upgraded OS to latest 3.0.8 at the very beginning). It gets very sluggish and unresponsive the more you use it. Even after you close all background apps.  I found tapping on buttons many times before I got a response from the application. Even the built in apps like Mail sometimes stop responding.  iOS seems to have much better background management than WebOS. I had to reboot Touchpad just to get Accuweather app running. It just refused to start.
Another issue I had with the rotation sensitivity. It’s just horribly sensitive, turning tablet just slightly causes screen to flip back and forth, and once it’s starting flipping it gets slow. I’m sure there’s a simple setting in OS that can be adjusted for that, but that would probably never happen.
HP Touchpad has built in vibration notification. This is something that iPad lacks. It’s actually really nice to have in a tablet, especially if you are using it with sound muted.

I knew that Touchpad had stereo speakers, but I didn’t expect them to sound so loude and clean!  These are made by Beats Audio and let me tell you they are not a gimmick.  They do sound really really nice, so you can easily use Touchpad as a small TV and watch it in a group 🙂  This will also make a nice nightstand multimedia player/alarm clock.  I’m seriously thinking about getting HP Touchstone stand (which also charges it conductively) now 🙂
Camera and built in apps.
Believe it or not, this slate doesn’t come with any software for using camera other than Skype.  Camera is ok, it’s standard VGA resolution and works fine during calls.  One frustrating thing about front facing cameras on ALL tablets is it’s angle. In order for your face to be visible you have to hold tablet at very unnatural angle, otherwise all people will see is top of yoru head or a ceiling. I had same problem with iPad. Is it just me or anyone else find this ridiculous?
Skype app nicely integrates in the WebOS and doesn’t feel like a stand alone application. Same can be said for mail and chat.  Touchpad has built in GPS so many application can use location services. However they way it’s implemented leads to some frustration. You can either enable or disable Location services globally, which is what I did. So each time application starts it will ask you to enable location service as a one time deal. Next time you start same app, it will ask you this again. I didn’t find an option to enable location permanently per App.
There’s also built in Facebook app, which works ok, but can get laggy.  All notifications from Facebook, e-mail and Skype will show up on the top menu. If your touchpad is sleeping, you will see home button indicator glowing once you receive notification. After you turn it on, notification will pop up, just like on iPad. I have no problems with this.

Actual usage time will vary depending on what you are doing, but seems to be adequate and feels like it would last at least 5 hours during heavy usage (games/movies, web browsing). However battery drains faster than desired when device is suspended. It’s much worse than iPad. I left my Touchpad alone for about 2 days and when I checked battery was down to 25%. I believe this is becuase device actively checks e-mails, Facebook updates, etc. continuesly.

Is HP Touchpad better than iPad 2?  Hell no!  It feels clunky, slow at times and just less polished. However it’s awesome tablet for $100, value is just incredible (if you can still find one). Whether you will use it carry around on commutes, use it as a mega-cool picture frame/alram clock or give someone as a gift  you really can’t go wrong. Even for $200 it’s definitely worth the money. And there are some folks who are working the Android port for Touchpad. If they succede this device will have it’s life extended almost indefinately.