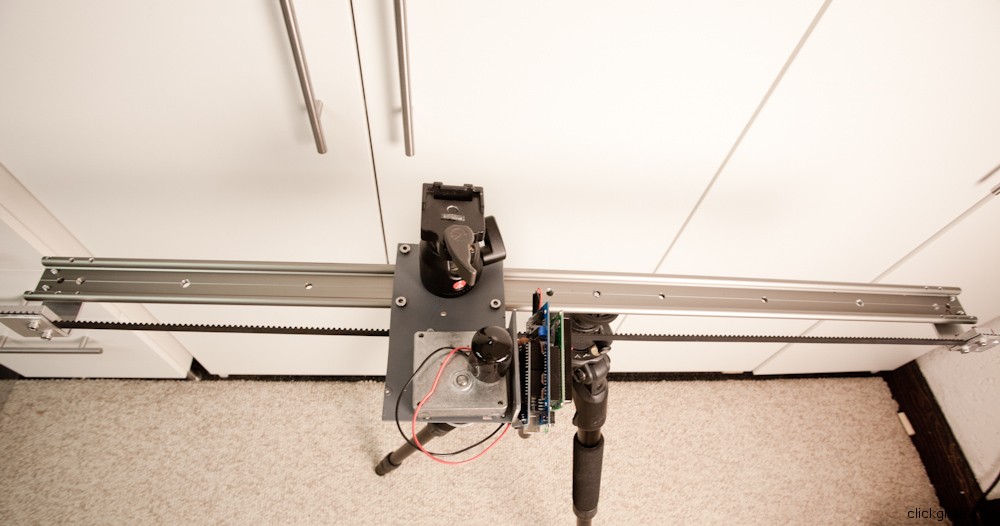 I built my slider based on Vimeos user “XCM” who in turn based it on Stage Zero Dolly.
Igus slider rail is main chassis holding everything together. Special platform attached to the igus carriage platform has geared motor and set of pulleys. It moves itself along HTD-5 timing belt that’s attached to the rail at each end with clamps. Whole system is driven by MX2 Dolly shield and Arduino.  It’s capable of capturing a movie while it’s moving horizontally or vertically (yes it’s that powerful) and controlling camera’s shutter for a time lapse photography. 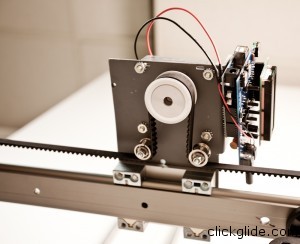 If you just read only this part of my blog it will be worth it. Finding all the parts in USA was a nightmare, but I managed to locate them!  Because whole system is built around HTD-5 timing belt (High Torque Drive with 5 mm pitch) I had to find right timing belt pulley. But here’s the issue. Belt is metric so pully is metric to, however gear motors that I could find have shaft of 5/16″ which doesn’t fit any HTD pulley I could find. Fortunately a company in Long Island, NY makes metric pulleys with imperial cores!  And they sell timing belts too!
Another problem I encounter was with belt clamps. Very few companies sell HTD clamps, and the price they charge for them is astronomical. $60-90 per clamp, which is nothing but a small aluminum plate with ridges.  It probably took me a week to find a company in New Jersey that makes these for just under $8!  Not all parts were off shelf. Motor mount was made from old power supply cover which was made out of thick aluminum. Tension rollers were taken out of DLT tape drive but you can also find similar rollers inside VCR.
And now the list:

Total Cost for me was around $320 without tripods/heads.

The most useful power tool for this project is without a doubt a drill press.  Mine is 10″ Ryobi and I got it for under $100 at home depot. Currently is the most used single piece of equipment in my basement, I strongly suggest you get one if you have room.
Other tool and supplies you will need:

If your Igus slider is not pre-drilled you will want to drill and tap a 3/8-16 thread hole in the middle of carriage plate for the camera’s head.  In the middle of the rail I made another 3/8-16 thread for attaching rail to tripod.  If you plan to use two tripods make two more holes/threads on each end of the rail. It might be a good idea to use 1/4 thread instead of 3/16 if your quick-release plate doesn’t have 3/8-16 screw. 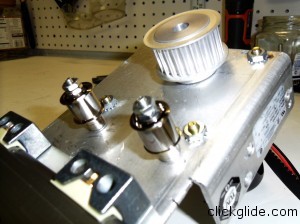 Take your aluminum plate and cut out approx 100x180mm rectangular piece with hacksaw.  Use special blade for metal. Adding a little cutting oil to it will help along, but might create more mess.  Cut edges will be rough so filed them down to smooth finish removing any sharp pieces.
Next I drill holes for attaching mount to the carriage. To do this take carriage off the rail (removing all 4 hex machine screws), and used it as template to mark the 5 holes on the motor mount. 4 for the corner screws and one in the middle for the head screw.  For corner screws I drilled over-sized holes with 7/32″ drill bit, and for the middle one I used drill bit large enough to clear 3/8″ screw. Before drilling large holes it’s recommended to  use small size bit to drill pilot holes.  After cleaning holes with round file,  try it on the carriage platform to make sure it fits nicely. If your holes misaligned slightly you can make them bigger, just make sure they are not larger than machine screw heads that will hold them.
Next mark 5 holes for attaching gear motor. Drill them, making central one big enough to clear 5/16″ motor shaft. If everything aligns secure motor with nuts to the mount.
Find good spots for the tension pulleys.  Make sure they won’t interfere with Igus rail or tripod’s head. This is how I placed mine. 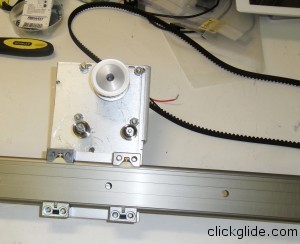 Drill and tap holes for the right size screw that will hold them, and secure with screws and nylon lock nuts. Don’t make it too tight, they should rotate freely. 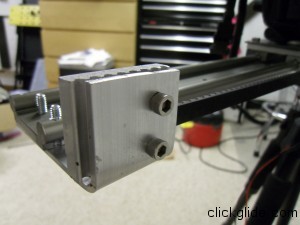 Belt is held at each end of the rail by aluminum clamps attached to an L-bracket, which in turn screwed on to the rail with two 10-24 machine screws. You need to be careful with making those to make sure they are right distance from the rail and right height. Good idea would be to attach L-brackets with woodworking clamps, use more clamps to hold timing belt and thread it thru  all the pulleys. This will tell you distance from the rail that belt needs to be held. Also notice which way belt’s grooves will be facing. I made a huge mistake by putting those brackets backwards and had to completely scrap and buy aluminum from home depot (a $12 and day and half worth of time mistake).
On my setup, belt got to be about 3 cm away from the rail, and on the same level as rail edge. To make L-bracket cut from a flat strip of aluminum I 11 cm long pieces and bent them at 7.5 cm mark to 90 degree angle. Use hacksaw to cut aluminum. To bend it put it in the wise and use rubber mallet and whack the heck out of it until it bends. Make sure it’s straight in the wise, or your bent will be crooked.
Drill and tap (10-24 thread) two holes on each clamp. Make sure distance between them is sufficient to fit 9mm timing belt, and also try to make lowest whole as low as possible.  You can make 4 holes if desired, or cut each clamp in half (they are too long anyway).
Now using it as template mark holes on the short part of the L-brackets and drill large holes in the brackets with 7/32 drill bit. Your 10-24 screws will go thru L-brackets and screw into clamps from the ridged side.
Drill and tap 2 10-24 threads on each side of the rail. Using it template mark holes for the L-Brackets and drill brackets with 7/32 drill bit.  This is where screws will go in that attach brackets to the rail. 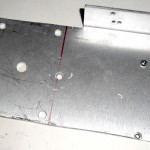 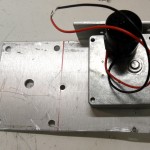 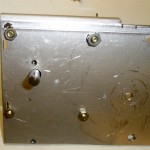 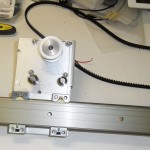 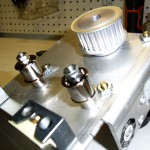 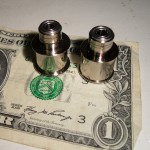 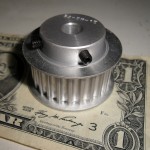 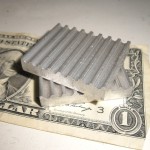 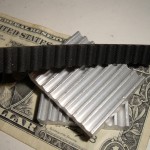 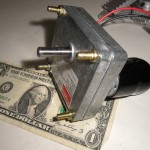 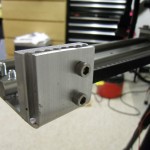 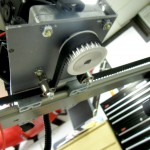 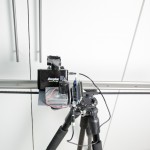 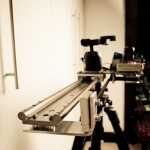 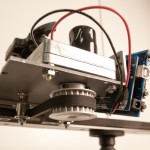 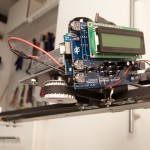 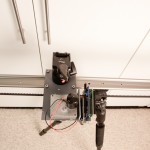 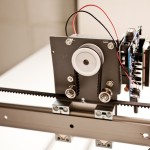 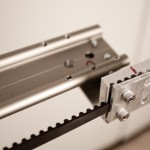 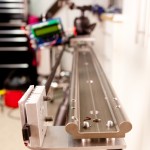 You can attach whole slider directly to tripod via 3/8″-16″ thread, however it’s very cumbersome and you can’t really change rail angle.  So for best result attach it to a head. Then your second head (for the camera) will go on the igus slider carriage platform attached via short 3/8″-16″ screw.
I already had pretty heavy Giottos tripod with Manfrotto 701HDV video head. But surprise surprise, whole setup with Canon 5D MkII camera and 24-100mm lens was too heavy for 701HDV head so it would not hold when camera was closer to the rail end 🙁  It looks like head that holds more load is needed. I think Manfrotto 501HDV will do.  I will use my 701HDV for the camera.

Initially I had a lot of issues with DollySheild controller, , but eventually got it working with some modifications to the hardware and code which I will not cover it in this post.

Let me know if you have any questions or comments, I’ll try to reply to all 🙂

Here’s video of slider in Action: