Can rare brain problem “BKR” cause your cat to urinate on your bed? 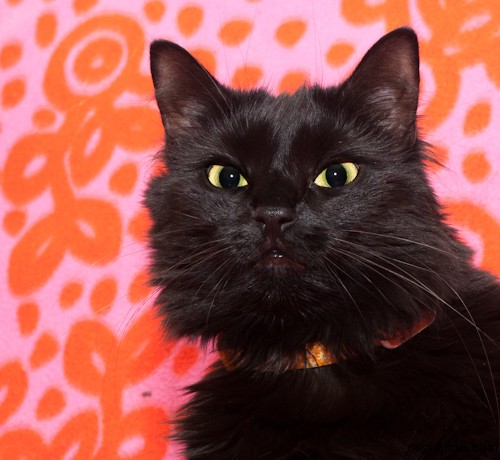 Couple of years ago I’ve adopted adorable furry kitten.  At that point I already had another 3 year old female cat so I was a little worried if they get along, and while it took couple of weeks my older one got used to the new one.

Kitten was a joyful mischievous thing, with super gentle, I would even say completely defenseless character. Never bite or scratch you no matter what.  She didn’t even fight our older cat when she was bullying her.

Both cats are litter trained, even before we got them. Older one will never pee anywhere but her litter box, and even if we moved it she’d immediately find and use it.  But there was a disturbing problem with younger cat. She would pee on my leather couch, on my bed, and sometimes even in her own bed. This would happen randomly, sometimes a month would pass between incidents.  Strangest thing is that it seems she would pee like she didn’t intend it too. She might be super happy purring on top of you in the morning and then all of the sudden she’d urinate.  She almost never would urinate when nobody is home, it always happened when someone is near.  And why would she urinate in her own cat bed? That what made no sense at all to me, cats do not sleep eat and pee in the same place.

I’ve researched for a long time and ruled out all the common symptoms such as URI, territorial (more on this later), stress, etc.  We took her to the vet, switched food from dry to wet (grain free) and yes she is fixed.  Well she was only 50% fixed as we found out, because whoever fixed her before she was adopted didn’t remove her ovaries (just the uterus) so we had to do exploratory surgery, but that’s whole another story.

The only two more or less plausible explanation I could think of is either she was punishing us for something, or it was somehow territorial, the way for her to get rid of our older cat, as they do compete for attention all the time.  But even then occasionally she would urinate when second cat was nowhere around, food and attention was plenty.

I have always suspected that there was something not completely right with her brain. Something just seemed a little off in her behavior.  For example she almost always start yawning in the middle of the meow (that’s actually looks and sounds very funny).  Another one was that she would release her claws when you talk to her in gentle voice or when she’s happy to see me.  And she does it while walking, sometimes getting stuck in the carpet (I can really hear her coming in the carpeted rooms).
Finally there was strangest oddity of all, I’ll call it “broken kneading reflex” or BKR (hey I can name things that I discover, right? 🙂 )

All cats that I’ve seen have kneading reflex (at least when they are kittens). Experts say it helps young kittens to get more milk from the mother.  Domesticated cats mostly retain this reflex. It makes them happy (releases endorphins) accompanied by purring and they usually do it when when they are ready to nap and/or feel good.  Our older cat kneads all the time, mostly on the thing she is about to sleep on, sometimes she does it on my leg (which is a little painful, as she get’s her claws out).
But the younger cat never kneaded when she was a kitten. Around when she was 1 year old, she seemed to begin doing it but extremely awkward. It was as if she was learning it from our older cat.  She only does it when she’s in our bed.
Slowly she got better at it. Instead of digging or pushing with her paws forward, she started to push down. She still didn’t quite got a hang of it, her legs are too far stretched when she does it.  At the same time it has occurred to me that she didn’t urinate at all in the past 3-4 months!

There seems to be no logical connection with BKR and urinating on the bed, I would’ve never made such connection if it wasn’t for accidental thought that occurred to me this morning.  When cat get’s ready to urinate it digs. It’s a reflex.  One can argue that digging is similar to kneading. Cat is moving her front paws in similar fashion, it smells place that it’s about to dig or knead. So could it be that her neural circuitry was misfiring, triggering urinating reflex when she really wanted to knead?  If kneading and digging occupy close by regions of the brain it could very well crossfire…

It seems plausible to me because I’ve been doing a lot of programming lately for my Arduino micro-controller.  When you write code, you want to make it efficient. If you do things like lighting LED multiple times (which takes several lines of code), you wouldn’t write code for each on/off function. You would create a custom subroutine “Switch On LED” and use it whenever you need to perform this action. Brain is similarly  efficient.  There are must be reusable areas that server multiple purpose. For example let’s say you have an area in your brain that knows all that’s needed to open your mouth (which muscles to activate in which order, etc.).  Actions such as yawning, eating and talking all most likely reference this area.  Of course   I don’t know for sure, but it seems very logical.

If I’m right about BKR and it’s link to urination, our cat should never pee on our bed, furniture or carpet again, as long as brain can now distinguish between digging and kneading.  Hey and my theory even would explain why she’s yawning and meowing at the same time too 🙂