Some big updates on my LED Clock project!

First of all I finally came up with a name: “XRONOS Clock”. “X” is “Chi” and it’s 22nd letter of  the Greek Alphabet and reads as “ch”, so Xronos is actually pronounced as Chronos.   As you probably know Chronos is God of Time, thus the name. And since new clock enclosure resembles “X” I choose that “Chi” letter.

Second, PCBs finally arrived from OSH Park few days ago!  I was able to solder all the components to my first prototype and for the most part it works!!! 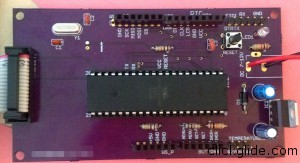 There were at least 3 issues with the board.

First issue is biggest one with FTDI header, it was interfering with clock for some reason (I suspect TX/RX traces are too close to others). Clock would not run when plugged into USB. Strangely enough on second day those issues seem to be gone, and everything is working great!

Second issue is a design flaw of the power supply. Since I’m using 7805 voltage regulator, it gets VERY hot, especially when using 12V DC power supply.  This will be an issue with thermal sensor and overall power efficiency.  I did some research and it looks like switching regulator is a lot better solution, but it’s expensive.  So I decided to forgo voltage regulator and rely on good 5V power supply instead.   I also found super cheap external breakout board with switching regulator that can handle pretty much any voltage up to 40V and convert it to clean 5V.

Finally I realized that I put FTDI headers wrong way, which is no biggie.

I’ve already made new version of PCB and sent it to OSH Park for manufacturing. I was able to shrink it’s size significantly and save me some money 🙂

Improvements I made to the PCB design:

I finally designed Acrylic enclosure and sent it to be Laser cut at Pololu.  I decided to use Pololu this time, because Ponoko is super slow, they still didn’t start making my DollyShield enclosure which I sent to them 10 day ago!   Unfortunately neither company carries 1/4″ thick acrylic that’s transparent grey, so  I will have to buy it separately and later send to them.  For now I just orders it to be cut in clear acrylic.  I still didn’t receive quote from Pololu, I’m afraid it will not be cheap 🙁  Ponoko’s quote came out to be $75!

On my to-do list is figure out and make small amp for the sound.  I’ll try to piggybank another Amp chip on top of one that’s already on WaveShield, or create small daughter board. I also made another small revision to my PCB. I will use polorized locking headers for both power and buttons for a more secure connection. 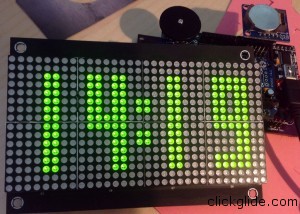 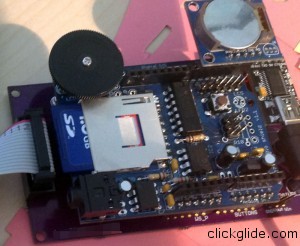