Today I have some great news and some not so great… 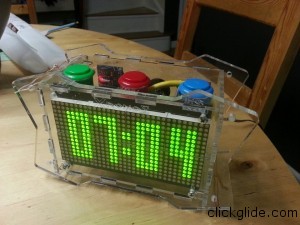 Great news is that I finally received laser cut enclosure for my Xronos clock from Pololu (turnaround was really fast!), and while it needed some tweaking (extra drilling) it fits clock electronics just fine!  I couldn’t believe how nice and sung all parts of laser cut acrylic fit together!  At this point I realized that I overcomplicated my design. Removing half those interlocking “teeth” would still make case hold together, and there’s really no need for any t-join screws!  However putting it together is tough, and I even broke a piece 🙁  So I will leave t-screws and in fact decided to add some on top. Idea is to assemble sides, top and bottom together, insert it into front and then close with back.  In fact I’m going to make left side independently removable to service clock battery and connect FTDI adapter.

Biggest issue was with width of the clock. I miscalculated length of the long screws by 1/2 ” so until 3-1/2 long #8 screws arrive I have no way to keep enclosure closed (other than some ugly twisted wires).
I also didn’t account for the fact that DC jack’s neck is not long enough to protrude thru 1/4″ acrylic 🙁  With some drilling with huge bit I was able to eventually fit it in, but then I realized I can just install it on the left side, doh! 🙂
Most holes need enlargement. Top holes for arcade buttons slightly small, as well as holes for main long screws.   No biggie, easy fix with larger drill bit and round file.
When I assembled clock I realized I have no room for LM386 audio amp board, it just wouldn’t fit. But then I connected speaker (hot glued to the right side), and it sounds loud enough!  Not sure why I though it didn’t sound loud before, maybe attaching it to the “grilled” side amplifies sound.  If I want to make it louder, I can always piggyback another OpAmp on WaveShield.  Right now it sounds so nice and clear, no more distortions from LM386, I’m overjoyed!
As first test I set it up at my bed side and set alarm.  Right away I noticed that display is WAY to bright even on lowest setting. Hopefully grey acrylic and some code tweak will make it dimmer. And boy alarm was loud!  I’m going to add auto digital volume control (sounds like it’s possible to do via WaveHC library) and an external volume pot for manual adjustment.   Overall, it’s a success!!!

Now for the bad news. 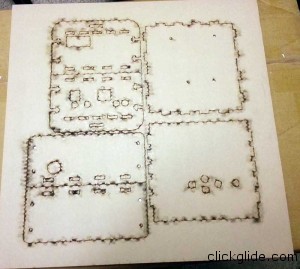 After almost a month waiting for DollyShield enclosure to arrive from Ponoko (I won’t be using them anymore), it finally arrived and all parts were… completely blown out of proportions! 🙁  And it was my fault as well. I don’t know how but somehow while transferring file from Sketchup to Illustrator size changed significantly.

Lesson learned, always print and cut out parts on paper before sending them for expensive laser cutting…

That’s all the updates for today 🙂