Yesterday I made significant revision to PCB layout. Basically added RTC with battery on board (yey,  no more awkward mini board attachment), added connector for photo-resistor (to adjust LED brightness based on ambient light) and connected more ATMega pins for prototyping.   Best thing, there was only marginal increase in overall PCB size, so price for making it went up only by few bucks! I was lucky to get my board in time for OSH Park’s next batch which was already sent to manufacturing.

There’s however one bad news. Sure’s LED display board I got from e-bay in December is defective. 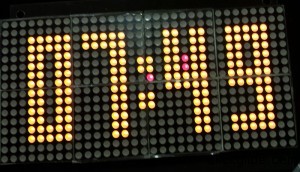 One of the screens turns random red LEDs on. Sure electronics said they’ll accept return but I’m afraid that shipping it back to China will be too costly… At least I can use it in Green mode only….